Dr Razia Sultanova has studied and worked at both the Tashkent and Moscow State Conservatories and worked at the Russian Institute of Art Studies in Moscow. In 1994 she moved to reside in the UK and work at the University of London and since 2008 has worked at the University of Cambridge. She is the author of four books and five edited volumes (in Russian, French and English) on Central Asian gender, religion and music. She has been a visiting Professor at Moscow State Conservatory (Russia), at the Kazakh National University of Arts (Nur-Sultan), and at the Khoja Ahmet Yassawi Kazakh-Turkish University (Kazakhstan/Turkey). rs@cambridgemuslimcollege.ac.uk

Dr Yaqub Chaudhary continues at Cambridge Muslim College for a second year with his research on Artificial Intelligence. yc@cambridgemuslimcollege.ac.uk

Dr Yaqub Chaudhary holds a Phd in Physics from Imperial College London, where he worked on the Physics of Plastic Electronic Materials and their potential use in future types of lasers. Prior to this he studied Electronic Engineering at the same institution. As Research Fellow in Science and Religion he is reprising his long-standing interest in Artificial Intelligence and his current research project will consider recent developments in the fields of AI, cognitive science and neuroscience in connection with Islamic conceptions of the mind, intelligence, human reasoning, cognition, knowledge, the nature of perception and consciousness. yc@cambridgemuslimcollege.ac.uk

Professor John Mayberry is a Consultant Physician & Professor of Gastroenterology at the University of Leicester. During his time at CMC he looked into hospital chaplaincy and the role of supplicatory and intercessory prayer in patient care. He also organised a seminar on hijama and the wider relationship between traditional and modern medicine which was attended by health professionals and interested parties.

Dr Asim Islam holds a doctorate in Pure Mathematics and is a Research Fellow in Science and Religion researching mathematical and physical sciences and their deeper interpretation in relation to human perception and self awareness. He was awarded a PhD in Mathematics from Royal Holloway University of London and has published part of his thesis on Analytic Number Theory in the Journal of the London Mathematical Society. He is also undertaking studies at the Department of Theoretical Physics at Imperial College London in Quantum Field Theory and Fundamental Forces. His first degree was in medicine from the University of Cambridge and he is a qualified medical doctor. ami@cambridgemuslimcollege.ac.uk 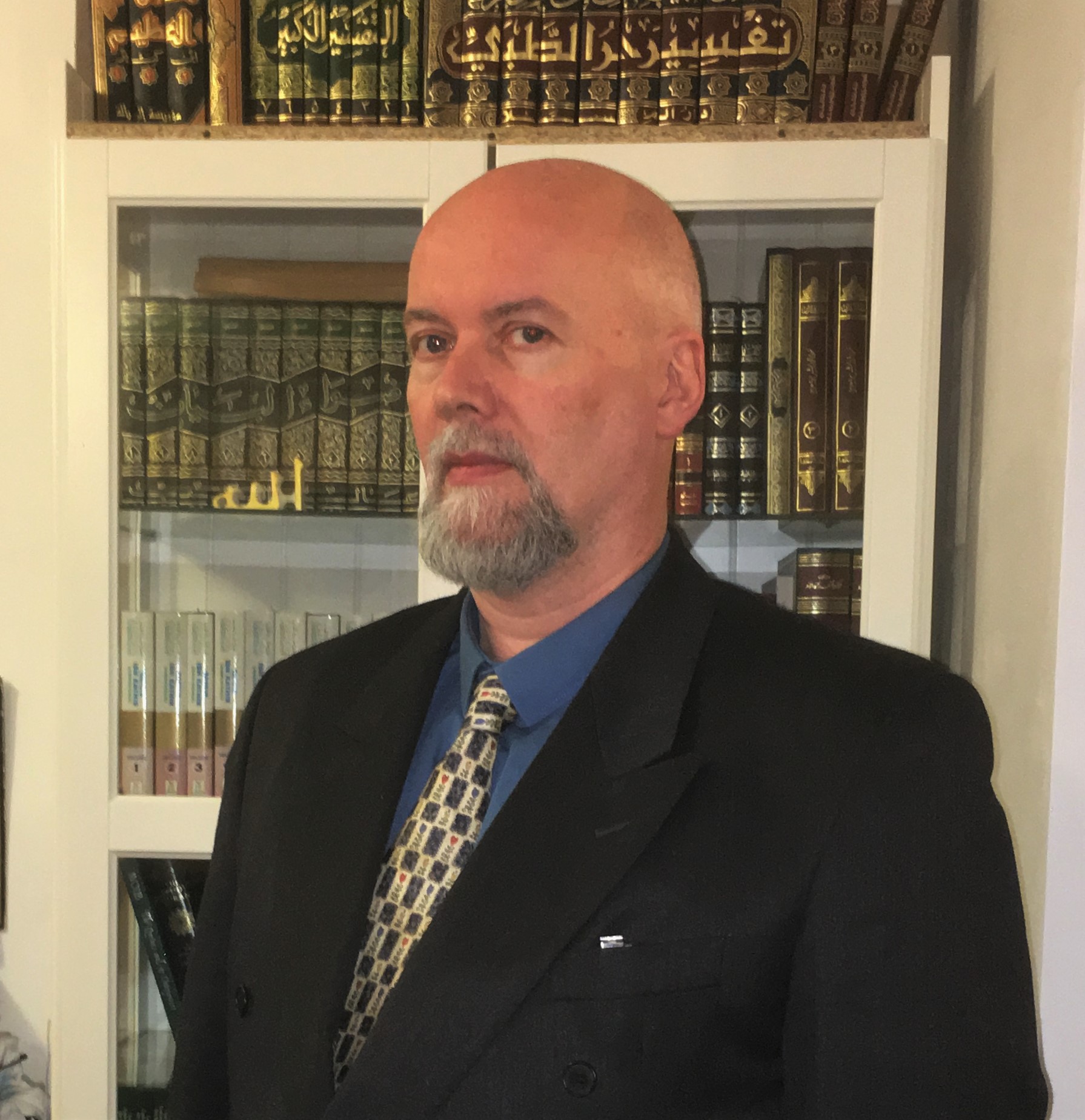 Dr Dāwūd Bone is researching aspects of education including opportunities to extend the work developed at the College into schools. He will be addressing curriculum issues and aspects of Islamic thought relating to teaching and school management. His doctorate from The University of Warwick focused on multi-faith religious education in British Darul ʿUlūms, research he then applied to Muslim school leadership as an award-winning headteacher of Muslim schools in London and Bristol. He has also engaged extensively in Christian-Muslim relations and was previously a Director of the Centre for the Study of Muslim-Jewish Relations at the Woolf Institute in Cambridge. db@cambridgemuslimcollege.org

Dr Samer Dajani studies the different methodologies of the Sunni schools of jurisprudence, as well as broader theories on legal diversity and the nature of the Shari’a. His PhD focused on the links between the legal thought of four major Sufi figures from the 3rd/9th century until the 19th centuries, as well as the influence of their ideas on later revivalist movements in the 19th and 20th centuries.  He received his BA in Arab & Islamic Civilizations from the American University in Cairo, followed by an MA and PhD in the field of Islamic Studies from SOAS, University of London. He is the author of Reassurance for the Seeker: A Biography and Translation of Salih al-Ja’fari’s al-Fawa’id al-Ja‘fariyya, a Commentary on Forty Prophetic Traditions (Fons Vitae, 2013) and his upcoming works include The Sufi’s and the Law: Ibn Arabi’s School of Mercy (to be published), “The Centrality of Ibn Arabi in Popular Hadith Chains” (Journal of the Muhyiddin Ibn Arabi Society, November 2017) and Sufi Hadith Commentaries and Their Impact on Classic Hadith Commentary Works (to be published). sd@cambridgemuslimcollege.org

Dr Harith Bin Ramli works on the history of early Islamic thought, focusing on the formation of Sufism and Islamic theology. He received his BA in Arabic and Middle Eastern Studies from the University of Durham in 2004, and MPhil in Medieval Arabic Thought from the University of Oxford in 2006. He then continued as a doctoral student at Oxford, receiving a DPhil in 2012 for his thesis on epistemology and theology in the fourth/tenth century text Qūt al-qulūb of Abū Ṭālib al-Makkī. He has taught courses on Sufism and Islamic theology at SOAS and the University of Nottingham, where he was a teaching fellow from 2013 to 2014.

Dr Ramon (Ibrahim) Harvey studies the Islamic scriptural sources and classical disciplines with a focus on Qur’anic interpretation and the sharī’ah. He received his MA and then PhD in Islamic Studies from SOAS, University of London, completing a thesis on societal justice in the Qur’an. Alongside his academic training, he has spent a number of years studying with traditionally trained Islamic scholars in the UK and has attended an intensive programme at Al-Azhar in Cairo. He has previously worked as a Senior Teaching Fellow at SOAS lecturing in Qur’an and Hadith, as well as writing biographical entries of early Islamic figures for a forthcoming collection. During the year at Cambridge Muslim College, he worked on revising his thesis into a monograph which was published as The Qur’an and the Just Society (Edinburgh University Press, 2017) and has published journal articles including “The Preferences of al-Ki’sa’i (d.189/805): Grammar and Meaning in a Canonical Reading of the Qur’an” (International Journal for the Semiotics of the Law 29, no. 2, 2016: 313-332) and “The Legal Epistemology of Qur’anic Variants: The Readings of Ibn Mas’ud in Kufan Fiqh and the Hanafi Madhab” (Journal of Qur’anic Studies 19, no. 1, 2017: 72-101. He continues his research in Qur’anic studies, early Islamic legal theory and Māturīdī theology and is currently Aziz Foundation Lecturer at Ebrahim College.

Dr Michael (Muhammad As’ad) Berdine was CMC’s first Principal, leading the College during its formative years, 2009-2013, then became a Research Fellow at CMC from 2013-14.  He is an historian specialising in the history of the British Empire in the Middle East and South Asia. He received his BA and MA in History at the University of Portland, before receiving his MA in Near Eastern Studies and PhD from the University of Arizona. He has extensive experience teaching Middle East, Islamic and World history, as well as in community outreach, especially inter-faith initiatives.  His book, The Accidental Tourist, Wilfrid Scawen Blunt and the British Invasion of Egypt in 1882, was published by Routledge Press in 2005.  His new book, The Re-Drawing of the Middle East: Sir Mark Sykes, Imperialism and the Sykes-Picot Agreement, published by I.B. Tauris, is listed as No.1 on Book Authority (USA) list of “12 Best New Middle East History Books to Read in 2018”.

Shaykh Abdur-Rahman Mangera was a Research Fellow at CMC for the academic year 2013-14.  He earned a BA in Islamic Studies from the University of Johannesburg, and graduated from Darul Uloom in Bury, England, then specialized in legal judgment (iftā’) at Mazahir ‘Ulum Saharanpur, India. This was followed by a Masters and PhD in Islamic Studies from SOAS (University of London). He has written Fiqh al-Imam, co-authored Reflections of Pearls, translated Hasan al-Basri’s Prayers for Forgiveness, Abu Hanifa’s Al-Fiqh al-Akbar, Provisions for the Seekers, Salat & Salam: In Praise of Allah’s Most Beloved, and has edited Imam Ghazali’s Beginning of Guidance and Shaykh ‘Abdullah Gangohi’s commentary on Ibn ‘Ata’illah al-Iskandari’s Hikam. He continues to work on scholarly publications through White Thread Press (www.whitethreadpress.com) including A Commentary of Tahawi’s Creed Based on the Classical Maturidi Commentaries, which is expected in 2018.

Dr Timothy Saunders has a professional and academic track record as a teacher and headmaster with 21 years’experience in schools and a special interest in academic leadership, pastoral care and team development overlapping the state and independent school sectors.  He is currently pioneering an integrated approach to the Inner Curriculum to enable teachers to enhance subject learning by infusing Spiritual, Moral, Cultural and Mental development into every lesson.  He is interested in school leadership as a form of  pastoral ministry, which was the subject of his doctoral thesis – he has a BA in Theology and PhD in School Leadership.  His website is islamicrenaissanceproject.

Dr Matthew L N Wilkinson (2012-13) published three journal papers on the application of critical realist theory to improve the representation of Islam in history and RE curricula in UK schools. These were Introducing Islamic Critical Realism (Journal of Critical Realism, 12 (4), 419-442), Helping Muslim Boys Succeed: The Case for History Education (The Curriculum Journal, 25 (3), 396-431) and The Concept of the Absent Curriculum: The Case of the Muslim Contribution and the English National Curriculum for History (Journal of Curriculum Studies, 1-22). This work became the basis of his book, A Fresh Look at Islam in a Multi-faith World: A Philosophy For Success Through Education which was awarded the Cheryl Frank Memorial Prize 2014 for the most creative and innovative work of critical realist philosophy. He is currently Research Fellow in Islam in Education and Law at the Centre of Islamic Studies, SOAS, University of London and Director of Curriculum for Cohesion.

Dr Joel Hayward (2012-13) was at the Cambridge Muslim College for only a short time before he was offered the post of Director, Institute of International and Civil Security, and Chair of the Department of Humanities and Social Sciences, at Khalifa University in Abu Dhabi. While at the College, Dr Hayward worked on the Islamic ethics of war.

Dr Fozia Bora (2011-12) has published three articles from her doctoral thesis.  She lectured at Cambridge University’s Divinity School, on ‘Madrasas in the Medieval Near East: Religious Scholarship and Political Subversion’, addressed the CMC students on ‘A History of Arabic Historiography’, and delivered a lecture on “Natural Selection: Fatimid Voices in Mamluk Chronicles” at a conference at the University of Ghent, Belgium. She also authored “A Mamluk Historian’s Holograph. Messages from a Musawwada of Ta’rikh” (Journal of Islamic Manuscripts, Volume 3, Number 2, 2012). Dr Fozia was subsequently appointed a Teaching Fellow in Middle Eastern History at the University of Leeds. She has since won the Royal Asiatic Society’s Staunton Prize for her article on Salah al-Din entitled, “Did Salah al-Din Destroy the Fatimids’ Books? An Historiographical Enquiry” (Journal of the Royal Asiatic Society, January 2015).

sur Ali (2011-12) spent his appointment working on two different areas of interest: Islamic practical theology and Hanafi fiqh. He co-authored a book on Muslim chaplaincy (Understanding Muslim Chaplaincy, Ashgate Publishers, 2013) with Dr Sophie Gilliat-Ray (Cardiff University) and Professor Stephen Pattison (Birmingham University). He has edited a complete translation of Qawa’id fi Ulum al-Hadith (Underlying Principles of Hadith, Turath Publishing, 2013) by Maulana Zafar Ahmad Uthmani.  He also worked on mapping the trajectory of Hanafi fiqh in history and delivered a number of papers at academic conferences and seminars.  Dr Mansur was subsequently appointed the Jameel Lecturer in Islamic Studies at the University of Cardiff.